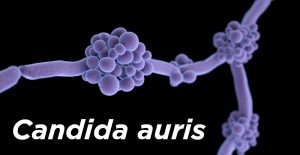 In case you missed it, Candida Auris has been making the headlines for the past year, giving candida the respect it deserves. After treating patients with candida for over 35+ years, I think it’s about time candida gets more attention. After all, I’ve written two books on candida, 180 articles on candida, and there are over 77,000+ studies on candida in the U. S. National Institutes of Health library (PubMed).

The Center for Disease Control (CDC) in the U.S. warns that C. auris “...presents a serious global health threat.” Some cases are already “…resistant to all three drug classes used to treat fungal infections.” Dr. Anne Schuchat, acting director of the CDC states that the C. auris “superbug poses a catastrophic threat to the public. Paige Armstrong, an Epidemic Intelligence Service Officer for the CDC says that the multi-drug resistance is “leaving no medication to treat” patients, which is “obviously very concerning.”

Candida auris was first found in a patient being treated in Japan, demonstrating that technology isn’t the only thing we get from the Japanese. The word “auris” refers to the ear, but it also refers to gold, which I consider C. auris to be for all the media attention it’s been able to gather, while Candida albicans still struggles in the shadows.

Okay, so should you be concerned about C. auris? It’s reported that 57-60% of those who get this infection will die, but in the US, that number is only around 30%. That certainly sounds worthy of consideration. It primarily affect the sickest of the sick who also have diabetes (candida has always been higher in diabetics) and some type of catheter (urinary or blood). Practically all of those who died were in hospitals receiving care and these hospitals were in advanced developed countries, primarily.

So the lesson appears to be stay away from hospitals if you can avoid them, especially if you have diabetes. There has to be more to this story though. There must be something in hospitals or something common to all hospitals that increases a patients risk of dying from fungal infections in them.

In my experience and from studying the science behind fungal candida, antibiotic use would be the common denominator. Obviously, I’m not the only one to think so as most every scientific publication states that antibiotics cause candida. “Hospitalized patients are at especially high risk from the fungus, because many have taken antibiotics, which can kill off healthy bacteria that help protect us from disease”, said Peter Hotez, dean of the National School of Tropical Medicine at Baylor College of Medicine in Houston.

Antibiotics create the ideal conditions for the overgrowth and spread of candida throughout the body. Some people state it’s the overuse of antibiotics, but that statement defies science as merely taking antibiotics will create fungal candida.

Unfortunately, in hospital settings after they’ve treated patients with antibiotics and weakened their immune systems and given them fungal infections, they’ll then use anti-fungal drugs, which also weaken the immune system and create anti-fungal superbugs.

Researchers at a recent CDC conference…said they detected C. auris in hospital rooms and on the skin of patients and nurses—after patients were given antifungal medications.

It’s taken the medical community just seven years to take C. auris from just another hospital-acquired infection to a superbug that threatens life. Hospitals are more efficient at this than anyone else. Whether we’re predicting increased deaths from anti-fungal resistant fungal infections or 10 million deaths per year from antibiotic-resistant bacterial infections, we need to re-assess whether using antibiotics or antifungals is the best choice.

As bad as they make C. auris sound, and it could get worse, Candida albicans has been exhibiting multi-drug resistance for decades. It’s the fourth leading cause of death in hospital-acquired infections and has been for decades.  C. auris is the new guy on the block, but he can’t compare to C. albicans, the reigning king of fungal infections. Candida albicans is also related to causing over 125+ other conditions, each with their own impressive lists of statistical significance, an accomplishment that C. auris hasn’t even begun to touch.

I welcome the new and the renewed interest in the significance and risk of candida infections. It helps to highlight how blind the medical profession is and how they keep creating more problems that take the lives of more and more people each year. The research on and rise of fungal candida is directly related to the introduction of antibiotics in the mid-1940s. From zero yearly studies on candida prior to 1945 to over 2000 a year today, it’s easy to see the link, even if you don’t know the science.

A recent article in the British Medical Journal highlighted the confusion of doctors who prescribe antibiotics. Most people would be very surprised to find out that doctors don’t have a scientific basis for how and when they prescribe antibiotics, or even anti-fungals. It’s more of a practice based on what other doctors are doing, an opinion-driven process. As Dr. Martin Godfrey, MD, puts it, “we need more definitive guidance about what to say to people.” That definitely sounds like someone who doesn’t know and is waiting for someone to tell him, not a very trust-inducing statement.

Most of the older people that I’ve had the privilege to know and work with, predictably avoid hospitals at all costs. They witness enough of their friends entering hospitals only never to return, most dying of complications related to conditions they never had prior to entering the hospital.

The best time to take care of yourself is now, years if not decades before hospitals ever would become an option. If you’ve ever had antibiotics, you already have the foundation for decreased health in your body. The time to correct the imbalances created by antibiotics is now. The place to start is here – www.CandidaPlan.com.