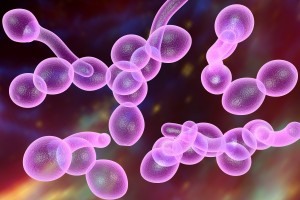 Can you cure candida without causing disease? There is a lot of confusion about what is and isn’t effective against candida. Many websites promote this treatment and that treatment, with the people behind the websites having very little knowledge about candida or how their product works in the body. In order to better understand what treatment works best, I think that it would be best to understand the body’s ecosystem first.

The microbial flora of the body, that we call the ecosystem, is composed of over 100 trillion bacteria that outnumber our own cells by at least a factor of ten to one. We are still discovering a lot about this microbial ecosystem and how it affects the human body, but more and more research points to an ongoing re-arrangement and modification of the exact ratios present. This system has multiple layers with viruses, bacteria, parasites, fungus, yeast, and other microbes all existing in a balanced state when we are healthy. Each microbe plays a vital role. Much is yet to be discovered, but we know from ecosystems in nature that sometimes the smallest microbe can have a major impact, like that one capstone that holds everything else together on a bridge or in a doorway.

While the majority of the species present are pretty fixed, minor fluctuations in the composition can have a major impact on health. Lose the capstone and everything can fall apart. Diet can play a big role and any dietary change that we make creates an almost immediate shift in the numbers and kinds of species present. This in turn can turn on and turn off the symptoms that we may experience at any moment. Some people report feeling better just by changing their diet.

Antibiotics will wipe out all of the bacteria in the body within a period of 5 to 7 days. Some of the species will never return leading to permanent population shifts that can remain for a lifetime unless corrected. These population shifts can form the foundation for diseases and conditions that follow. Systemic fungal candida is created by the imbalances caused by antibiotics. Without the bacteria present, and the massive shifts within this ecosystem, fungal candida will flourish and subsequently play a role in determining which bacteria re-establish themselves and to what degree that is possible.

What is lacking in the majority of approaches available for treating candida is a  profound appreciation and understanding of what a balanced ecosystem is, and how anything that upsets that balance becomes a doorway for greater imbalances that can eventually lead to a host of diseases including Alzheimer’s, Parkinson’s, and cancers. The goal of every treatment should be to restore balance without creating any additional imbalance. This is where many approaches fail. Let’s look at the common prototype of many treatments using turpentine as an example.

Turpentine is one choice out there that some people have used, although most people stay away from it due to the obvious toxicity concerns. While some people state that it’s not toxic, you have to take very small amounts into the body, or risk an emergency room visit. Turpentine is one of those old-time remedies that have been used for various infections and illnesses for probably well over two hundred years, with some sources dating it as far back as biblical times. Turpentine has been shown to kill fungus, as well as bacteria, parasites, and just about everything else., and that’s where the problem lies. Destroying all of these microbes can create other imbalances. The killing of the bacteria is indiscriminate. Turpentine will eliminate good and bad bacteria, good and bad parasites, good and bad everything. There is no differentiation between bad and good microbes with turpentine and that’s a problem. Destroying the ecosystem balance leads to diseases.

The common argument that many people use is to compare turpentine to water stating that even water at large enough doses can harm you. I fail to see the logic in this comparison. If the comparison had merit, you could drink an 8-ounce glass of water and an 8-ounce glass of turpentine equally as well without any concern, but that’s definitely not the case. Eight ounces of turpentine will get you a visit to the morgue.

Turpentine has been used successfully to treat many conditions, but just because it was used two hundred years ago when other safer alternatives weren’t available, or no choice at all, doesn’t mean that it’s the best choice to make today. They used to saw off infected limbs without anesthesia two hundred years ago, as well, but if needed, I don’t recommend following that approach either.

What about every organisms prime motive for survival? It is the reason behind antibiotic and anti fungal resistance. Microbes adapt very quickly when faced with extinction. They can go through several generations in 24 hours, whereas man takes 100 years to go through one generation. Trying to kill off microbes leads to adaptation. Creating more antimicrobial resistance that then becomes untreatable is not a good idea. Given what we know of the microbiome, anything that harms the microbes creates imbalances that can then can create disease and harm us.

In place of turpentine, you can substitute other known products that have an anti-fungal effect, but also have even stronger antibacterial effects – MMS, Bacillus subtilis, hydrogen peroxide, iodine, etc. Each of these will impact the entire ecosystem and create imbalances that may be lifelong. Many of these have wider antimicrobial effects than antibiotics. You can take an antibiotic and eliminate your symptoms, but then end up with cancer decades later. Cause-and-Effect is a very poor model in healthcare, as the effects may not occur until decades later.

Choose an approach that doesn’t “kill” candida. Anything that does will also kill the yeast form and create additional imbalances. Some researchers are now looking at candida’s ability to alkalize the body. Killing candida could lead to increased acidity in the tissues.

If it’s a part of the ecosystem, it’s probably a very necessary part. Some points of view state that candida exists in the body because of it’s ability to change from its yeast form to its fungal form. They believe that the fungal form plays a role in breaking down dead tissues and cells, and even cancer. A well-regulated ecosystem could create a shift that allows that change to take place as long as it is beneficial for the body. In essence, the ecosystem would take care of itself.

Let’s say that you have cancer and the ecosystem shifts to allow the yeast to fungus transition. The fungal cells could attack the cancerous cells to start breaking them down with its wide variety of enzymes. If you were to open this person up at this point, you might think that the fungus was causing the cancer. Such misunderstandings could lead to people developing the wrong impression of what’s taking place and then marketing that to others.

On the other hand, an ecosystem that has been destroyed by antibiotics, or other antimicrobials, may create opportunities for runaway fungal infections to create conditions that would eventually lead to cancers. The problem with all of these antimicrobial approaches is that they all see it from only this point of view.

In the end, it’s never just about candida. That’s a medical model that has never worked and it is primarily the reason why antibiotic resistance is now one of the top three threats to human health on the planet. Targeting one microbe and trying to eliminate it without consideration for the overall environment of the body continuously leads to the imbalance and disease.

This is a much longer post than I had intended to write, but it’s a complex subject. Go with the science, not someone’s personal interpretation of what’s taking place. It’s easy to interpret a change of symptoms as indicating something else other than what’s actually taking place. All of the approaches mentioned above will create a change in symptoms, but what’s the long-term effect? The body is so good at adapting that you may not know for years or decades. Go with the science. With over 65,000 studies on PubMed alone, there’s plenty to go by.

For those who would appreciate the shortened version of all of the above, here it is:

Buying a product to “kill” candida is like buying a tire. It’s not going to get you far. Buy the whole car, and while you’re at it, buy the best car you can. Go for a Mercedes, Rolls Royce, or Ferrari. Buy something that will get you a lot farther than trying to just push a tire around. Buy the Candida Plan. It’s your body. Your life.