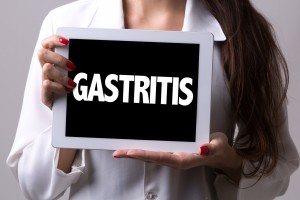 Candida and gastritis are commonly found linked together in research studies. Gastritis is a condition where inflammation of the lining of the stomach is present. Common causes associated with gastritis include stress, excessive alcohol consumption, and medications like aspirin and ibuprofen. A lesser known, but more common cause of this is decreased levels of hydrochloric acid in the stomach leading to cycles of over-production and under-production. The over-production cycles can injure the lining of the stomach, creating a vicious cycle of inflammation that breaks down the cells lining the stomach wall. When this happens, antibiotic-resistant H. pylori infections can set up in the stomach.

Chronically low levels of hydrochloric acid (HCL) in the stomach is a condition created by antibiotic exposure. Antibiotics destroy the beneficial bacteria of the stomach and intestinal tract. These bacteria play a role in the production of HCL. These bacteria may never return in some people, resulting in gastritis. A recent study from the Universityof Michigan has shown that Candida albicans plays a role in the creation of gastritis. Candida can manipulate the re-establishment of certain bacterial species in the stomach. These bacteria, Lactobacillus spp., play a role in prevention of gastritis and regulation of inflammation.

Scientists at the University found that antibiotics alone were not able to create the gastritis. Colonization of the stomach with Candida was also needed. This same effect was also noted in earlier research concerning the re-establishment of the bacterial flora in the intestinal tract after antibiotic use. A 5-day or 7-day course of antibiotics can eliminate practically all bacteria in the body, leaving only antibiotic-resistant bacteria. In that study, Candida also inhibited the re-establishment of Lactobacillus species.

The creation of fungal candida after antibiotic use is a very well established phenomenon. Prior to the introduction of antibiotics in the mid-1940s, there were hardly any studies on candida as a pathogen in the body. Since then, there have been over 65,000 studies on Candida and the list of diseases and conditions that it is associated with – allergies, asthma, arthritis, multiple sclerosis, psoriasis, eczema, rosacea, cancers, yeast infections, heart conditions, sinusitis, immune system suppression, diabetes, neurological conditions, etc. The list of associations grows every day. In 2012 alone, there were 2,382 studies on candida, which is enough for 6.5 new studies every day of the year.

Researcher Kenji Sasaki states that, “Candida is ubiquitously indigenous to the normal human gastrointestinal tract throughout[1] but infection with the fungus of the tract is more widespread than previously recognized[2,3]. The most frequently involved organ is the esophagus followed by the stomach[2]. Gastric candidiasis is classified into thrush, nodular and ulcerated types[4]. Though usually seen in immunocompromized hosts[2,3], Candida-associated gastric ulcer also occurs in apparently healthy individuals[5–9] and its frequency is widely different contingent on authors[8–12].

While science shows that candida plays a role in creating gastritis, it has also been found in a recent study that 75% of patients taking popular antacid medications to treat gastritis, also known as Proton Pump Inhibitors (Prilosec, Prevacid, Aciphex, Protonix, and Nexium) had fungal candida overgrowth. Also present, was overgrowth of antibiotic resistant strains of bacteria. Both findings point to the lasting effects of antibiotics in the body, and the risk of antacid medications. Prolonged use of antacid medications was associated with increased risks.

Without proper levels of HCL, we lose absorption of iron, protein, iodine, calcium, zinc, magnesium, B12, Folic acid, and many minerals. Iron is necessary for production of HCL, thus ensuring another vicious cycle leading to chronically low levels of HCL. Without the beneficial bacteria and sufficient levels of iron in the body, gastritis can result. HCl is also necessary for proper function of the liver/gall bladder, small intestine, pancreas, and immune system.

While gastritis itself is very problematic, it is a sign of a deeper imbalance within the body that can lead to more disastrous conditions. Proper management of gastritis is something best achieved by a holistic practitioner and patient relationship that focuses on the recovery of health, and not just the suppression of symptoms.

For a new start on a healthy life, visit Dr. McCombs Candida Plan.