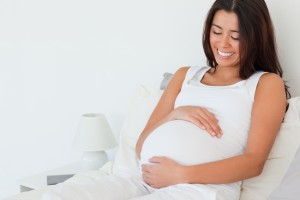 More and more science points out how critical and essential the intestinal flora (microbiome) is for health in the body. We are “Super-organisms.” The current point of view is that we consist of host cells (human cells) and support cells (bacteria, parasites, viruses, yeasts, fungi, etc.). Over thousands of years, we have co-evolved into a cohesive and co-dependent unit, where the presence and health of all the parts (human and non-human alike) constitutes the health of the whole. This recent research article demonstrates how the intestinal flora, or gut microbiota, play a regulatory role in creating a healthy pregnancy.

The composition of microbes in the gut changes dramatically during pregnancy, according to a study published by Cell Press in the August 3rd issue of the journal Cell. Although these changes are associated with metabolic disease under most circumstances, they could be beneficial in pregnant women.

“This is the first in-depth characterization of the gut microbiota associated with pregnancy,” says senior study author Ruth Ley of Cornell University. “The findings suggest that our bodies have co-evolved with the microbiota and may actually be using them as a tool — to help alter the mother’s metabolism to support the growth of the fetus.”

In nonpregnant animals, changes to gut microbe composition can cause symptoms of metabolic syndrome, including weight gain, abnormal glucose metabolism, and inflammation — an immune response that normally protects the body but can cause health problems. These symptoms also appear during pregnancy, but the underlying causes have been unclear, and few studies have examined the potential link to gut microbiota during pregnancy.

To address this question, Ley and her team obtained stool samples from 91 pregnant women. They found that gut microbes changed in composition from the first trimester to the third trimester, becoming less “normal” and less diverse over time. Health-boosting bacteria decreased in abundance, while disease-related bacteria increased in number. In addition, signs of inflammation increased over the course of the pregnancy. “The changes in gut microbes were not related to diet, so we think the immune system or hormones play a role,” Ley says.

“By the third trimester, the microbiota can induce changes in metabolism,” Ley says. “In the context of pregnancy, these metabolic changes in the mother are healthy, because they promote energy storage in fat tissue and help support the fetus. Outside of pregnancy, however, these changes can lead to the development of type 2 diabetes and other health problems.”

Antibiotics play a damaging role to this Super-organism by destroying the gut microbiota and the health of the body as a whole. The continued use of antibiotics will continue to create disease and sickness and many of the imbalances associated with pregnancies. It has already been shown that even one antibiotic pill can cause an increase in breast cancers by 50%. Other research shows that antibiotics cause cardiovascular diseases, obesity, diabetes, skin disorders, neurological diseases, and many more conditions. We are finding more and more reasons for limiting and eliminating the use of antibiotics.

Restore health and balance to your body with Dr. McCombs Candida Plan.