GLUT1 is a missing link in healthcare for many people!

GLUT1 is a missing link in healthcare for many people! 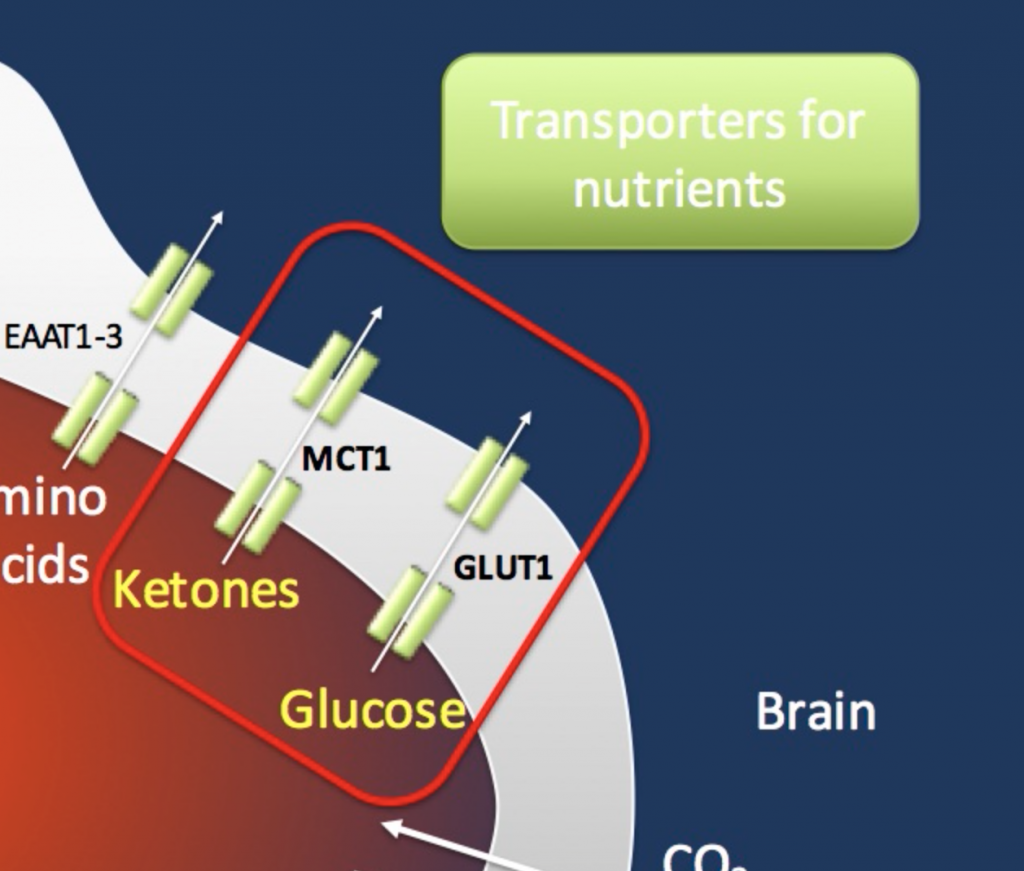 If I told you that GLUT1 is a missing link in healthcare for many people, you probably wouldn’t know what I was talking about. It’s time to find out as this applies to many, many people.

GLUT1 is the abbreviation for Glucose-Transporter 1. Its job is to transport glucose across the cell wall membrane and into the cell. It is controlled by the SLC2A1 gene. With glucose being the primary fuel for every cell of the body, genetic mutations can have very detrimental results that can promote or cause a wide variety of diseases and conditions throughout the body. It doesn’t take much to cause issues within various cells of the body as was clearly stated in this paper  – “A mutation in just one allele of SLC2A1, which encodes GLUT1, can cause movement disorders, epilepsy, and developmental delay.”  So why is this common issue unknown and for the most part unaddressed?

Medicine typically recognizes this issue as only a rare disorder in children who are greatly affected by it to the point that it causes seizures, and movement disorders, or the role that in can play in cancers. Even then, the average time it takes to diagnose this condition is 6.6 years. For everyone else, it lies hidden within the genes with the ability to contribute to imbalances throughout life.

There are 14 types of GLUTs that are encoded by human genetics. They function in various tissues and most are responsible for glucose transport, while some transport fructose. Some play more dominant roles than others. Mutations in any of these can have profound affects.

Let’s consider a patient, we’ll call Bob, that came to me with multiple issues. Brain fog, anxiety, depression, lack of focus, cognitive dysfunction, and the inability to focus were his daily challenges. On top of that, he had recurring fungal candida infections that we were able to treat successfully. We ran a genetic test to check for variants that could be affecting him and to determine the specific nutrient gaps that only genetic testing can reveal. He had multiple GLUT1 genes with double or single mutations/variants. He also had 2 GLUT3 genes with double mutations, a more significant finding. Let’s look at these 2 two genes.

GLUT1 is primarily responsible for the transport of glucose across the blood brain barrier. Without this transport, glucose, the fuel needed to fuel cells doesn’t make it into the brain in significant amounts. Once glucose enters the brain, GLUT3 is responsible for transporting the glucose into the nerve cells. Consider once again the earlier quote – “A mutation in just one allele of SLC2A1, which encodes GLUT1, can cause movement disorders, epilepsy, and developmental delay.” If one has mutations in the GLUTs, it can play a role in fevers, headaches, brain fog, anxiety, depression, seizures/epilepsy, dementia, Parkinson’s, Alzheimers, cognitive dysfunction, ADD, ADHD, autism, etc. Any role that the brain is involved in can be affected, which extends itself to neurohormonal, neuroimmunological, and neuroendocrine disorders.

As those with the more severe form of GLUT 1 Deficiency Syndrome diagnosed earlier in life know, ketones can play a significant role in addressing GLUT deficiency. This is also true for people with lesser GLUT deficiency issues, as well.

Ketones are water soluble molecules formed from fatty acids and produced by the liver when glucose is in short supply. Many people are familiar with the ketogenic diet that emphasizes fats over carb consumption in an attempt to limit sugars and increase the production of ketone bodies.

In more recent years, exogenous ketones, supplied in the form of a supplement or liquid, can be used along with a ketogenic diet or as a stand alone product. A decade ago, this type of ketone supplement would have cost tens of thousands of dollars, but can now be found in the liquid form, for under $100 dollars in a 32-ounce bottle.

Ketones can be used as an alternate fuel for glucose in the cells. While this doesn’t completely replace the need for glucose, it can lower it significantly. I have seen some amazing results with their use in people with GLUT deficiencies.

When we had the results of Bob’s genetic test back, it was obvious that mutations in the GLUT gene were an issue for him. We immediately placed him on a liquid ketone supplement and within days, he had a tremendous response – “Well I have to say these Ketones are the damn Key.  Wow night and day difference, I feel GREAT.  Best I’ve felt in so many years now and I felt so terrible I wasn’t even functioning before. Ive always had to add in sugar post every meal to feel good and full.  I feel great now w/ none at all.  Thank you so much. Literally life changing how good I feel the last 2 days.”

Bob’s results was miraculous and this is something that we’ve seen time and again supplementing with ketones when GLUT (SLC2A1) mutations are present. I can’t state enough about the importance of genetic testing.

While Bob had amazing results initially, he began to see diminishing returns. Instead of consuming ketones twice a day, he decide that more was better. This is a very understandable sentiment. Looking at his genetics, we saw that a gene (ACAT) responsible for producing ketones in his body also had mutations. This most likely played a role in his previous symptoms. Unfortunately, the same ACAT gene is responsible for breaking down ketones so that you do not have toxic levels of ketones. With Bob consuming ketones multiple times throughout the day, he ran into the limitations of the ACAT gene and we were able to reduce his consumption and keep him within a zone that worked best for him.

This type of response is typical of the concept of Hormesis, whereby too little is ineffective and too much can be toxic. Hormesis applies to all nutrients, which makes genetic testing even more valuable, as only through genetics can we see all the peculiarities of then various pathways within each cell.

I worked with twins who were subject to febrile seizures, the girl more so than the boy. The girl had experienced several episodes and the boy only a couple. Genetic testing revealed mutations in the SLC2A1 and SLC2A3 genes that control GLUT1 and GLUT3 respectively. In healthcare, a fever is looked at as the body’s attempt to burn off an infection. In their case however, the fever was akin to an engine running out of oil and heating up. As the fever increased, it caused the cells to burn through the fuel faster, resulting in the brain shutting down or seizing up.

Knowing this would happen again at some point, I provided the parents with a powdered ketone formula to give either one when it happened. As fate would have it, the boy came down with a fever two days later. The parents provided the ketone formula and 10 minutes later, the fever was gone. The ketones provided the fuel the cells needed and normal function was restored. Three years have past with no re-occurence of any fevers to date.

It is important to keep in mind that GLUT transporters serve other cells, as well. Let’s consider the primary immune responses that the body uses to control and address fungal candida – Neutrophils, Th1, Th17, and IL17. Each of these are dependent on GLUT1 function.

If GLUT1 mutations are present, it is most likely that safe ongoing treatment will be an essential component for people with such issues. It may be that after balancing candida levels successfully, continuing to address GLUT deficiencies and supporting the above mentioned immune responses will produce the best results. For these, I recommend following the Candida Plan and ongoing support for the immune system with Detox Essentials.

I hope that this intro on the effects of the GLUTs will help fill in an important missing piece for many people. The GLUT transporters have been relegated to a rare disease classification and therefore most doctors don’t even understand or know about them. That means that GLUTs will continue to be overlooked for years and decades to come.

As I have mentioned, I have seen amazing results with addressing GLUT deficiencies, even within my own family. I can tell you that it could have been a long and expensive road with no guideposts or directions, chasing rainbows and red herrings if it were not for genetic testing. Fortunately, the state of genetic testing today is such that personalized nutrition is finally here, utilizing the individual blueprint found in each person. This not the 23andme or ancestry platforms, which are so limited in their findings, this is Functional Genomic Testing.

A physician is trained to view conditions through various lenses based on their training, experience, and even science. A smart physician will always question the lens and look for even better knowledge and understanding. Every physician should start training in genetics or employee someone who has. Not doing so, can be a great disservice.

We provide genetic testing for our patients and clients and also do so for other physicians. The results speak for themselves!