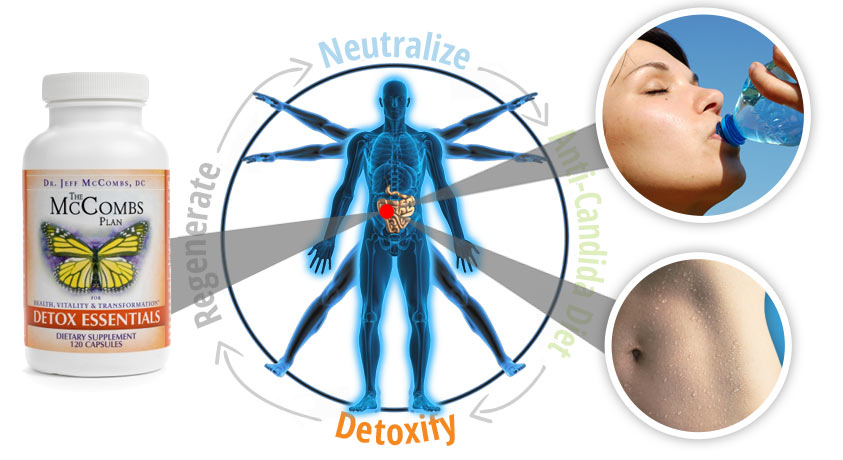 There are 4 important steps to support your body in detoxifying while on Dr. McCombs’ Candida Plan.

Detoxification puts an extra burden on the body. In order to maintain good health during the Candida Plan, the channels through which the body clears toxins must be open and functional. The liver, the gastrointestinal (GI) tract, the lungs and the skin are the major detoxification organs –or channels.

Every step below is necessary in order to make the detoxification as effortless as possible as well as avoiding any long-term problems caused by toxic overload.

The Candida Plan is the only anti-candida protocol that includes sweating as part of the detoxification process. In most Candida programs people experience a die-off reaction, which can range from mild to severe. A die-off reaction is the overload of toxicity released during the detoxification process that manifest in signs of discomfort such as increased inflammation, headaches, fatigue, achiness and most importantly an increase in the secretion of mucus which delays and disrupt the elimination of Candida.

By doing the sweating the die-off reaction is avoided because we are using the skin –the largest detoxification organ, to aid the body in getting rid of the excess toxicity. Sweating takes the burden off the liver and the GI tract.

This Vitamin C, Echinacea, red clover and lemon bioflavinoids supplement supports the body during the detoxification process. Vitamin C is one of the important nutrients involved in promoting a healthy immune system and higher than normal doses will help the body handle the die-off of the candida fungus.
Detox Essentials also boosts the immune system –in particular the neutrophils, a type of white blood cells that are very effective in getting rid of the excess yeast. In addition Detox Essentials purifies the lymphatic system, which directly supports the immune system.

Water is a key element to making the detoxification as pleasant and healthful process. Water helps rid the body of toxins (which includes Candida), reduces inflammation and keeps every cell in the body hydrated.
Once you begin to drink copious amounts of water, you will begin to lose your taste for sugary drinks and you won’t reach for them out of habit in order to satisfy your chronic thirst.

It’s important to keep the bowels moving during the plan. Most people believe that one bowel movement a day is normal, but according to the most basic textbook physiology, three to four bowel movements per day constitutes normal.

Learn about all 4 phases of Dr. McComb’s Candida Plan: